“If our youth arise and act, they have the strength and dynamism to generate a huge dynamism in the society”

SAI International School celebrated International Youth Day with full fervor on August 22, 2015 where members of the Going Global and Interact Clubs of SAI International School took on the Anti-Smoking campaign. Internationalism has always been in the ethos our school. Every year, the youth organizers of SAI select a theme to shape their efforts worldwide and based on the chosen theme they develop volunteer initiatives and organize awareness programs. Themes from recent years have included Anti-Bullying Campaign, Gender Equality Campaign and Anti-Corruption Campaign.

Our students aimed at spreading awareness among the crowd to refrain from activities which can cause health hazards to self and their near and dear ones. A message urging to quit smoking was typed on badges and t-shirts were distributed to the people present on the streets to spread awareness. The students presented a skit depicting the injurious effects of smoking that has become an ineludible habit among the youth today. This campaign was appreciated by the people and they even cheered for the SAIONEERS. 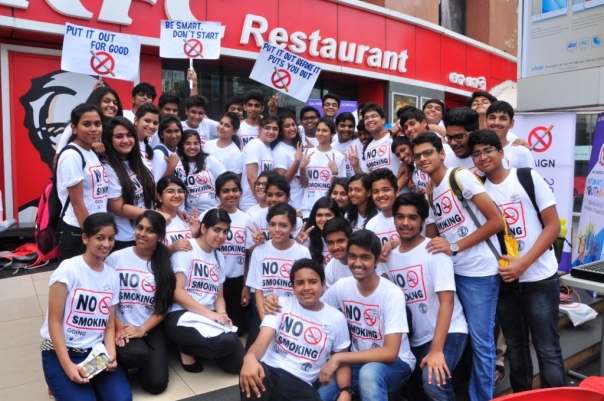 Principal Shri. Harish Sanduja, encouraged the students and supported the cause which they had taken up. “It is certainly a commendable initiative by SAI International School, where the students, the youth of today have come up to the street to spread awareness among all of us. Youth can undoubtedly be the change makers in the major issues of concern. It is a delight to see that, the students of SAI have started working in this direction” said a member from the audience witnessing the event.

The function came to an end with the students singing, ‘Aashayein’, breeding a hope among the crowd to quit smoking in order to lead a healthy life and even for a clean, pollution free environment.