The Global Immersion programme 2017 for UK had a great start with a large group of 17 students  ready to explore and traverse through a new learning roller coaster ride.Two teachers Binati Misra and Rashmi Sahoo with 17 students from classes VIII to X started their journey to the United Kingdom on the 3rd of June .Travelling with Qatar Airways the group reached Heathrow at 6.00 pm on the evening of the 4th of June 2017. There was another two and a half hours of drive to reach Chosen Hill School in Gloucester where excited students and parents were ready to welcome their guests ten students and one teacher dispersed with their hosts to rest for the day while one teacher and seven students went to stay in an Inn called The Old Elm Inn, which is a very popular place in the town. 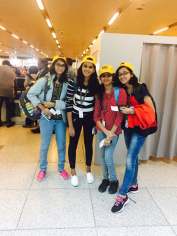 Day two was the beginning of the activities with the partner school.The coordinators Danielle Bayram and Alice Bailley were there to welcome the group and instructions were given to the students for the entire stay and also the programme was discussed vividly followed by the day’s event. The students practised for the Assembly and then set off on a tour to Gloucester Cathedral. A guide was already hired, who explained the history of the cathedral which also covered part of the Royal family’s history as well. Two more guides were waiting to take the group on a walking tour of Gloucester that has a very old culture and rich with its oriental architecture.SAI group did enjoy a souvenir shopping and returned back to their respective host families. 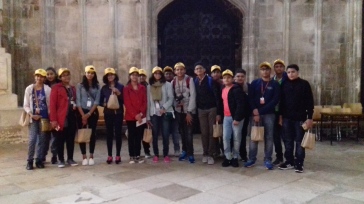 Day three was entirely a school day. SAI students presented in an Assembly for the year X students followed by class seven where the collaborative school project was done.This is a project on the heritage on Royal families of India. All the students were involved in the presentation in which they presented an ensemble of three songs and showed a power point presentation on India, Odisha and the school. The most attractive item was the showcasing of the festivals of India.The students then shadowed their hosts to attend their classes to learn about the curriculum and learning style of Chosen Hill School. The international club of the school hosted the afternoon Tea Party and the coordinators Miss Bailey,Ms Dani and the head teacher including the senior leadership team of the school attended the tea party.

The students themselves had baked cakes and scones which were really delicious. The students who stayed in the inn were taken to the Gloucester Quays to spend their evening after the hosts had taken the rest of the SAI students. 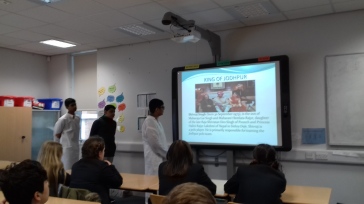 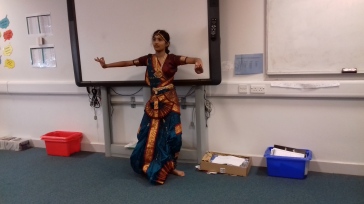 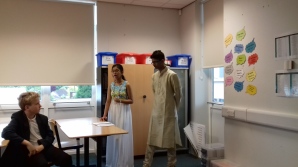 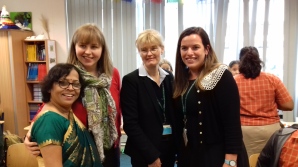 Day 4 was still more interesting for the students as that was the day when they were going to the famous theme park that is Drayton Manor. The students really had a very enjoyable time trying all the rides one after the other,although some of them were little scary still they wanted to experience and take the adventure.
Back in school that evening the CHS students taught SAI students how to play the game of Rounders and soon they learned the game so well that they gave a tough competition to the English students and really played well.The students were picked up by their hosts and the students who stayed in the Inn were given a grand dinner of Pizzas by the coordinators. 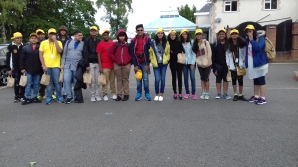 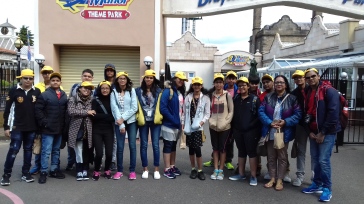 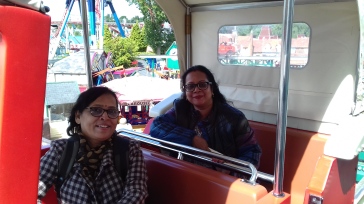 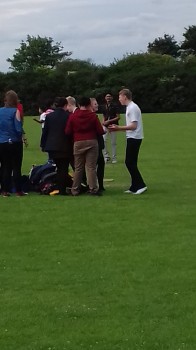 Day 5 was yet another exciting day as the students were to reach the most coveted and one of the oldest Universities of the world that is the Oxford University. Once again a hired guide was ready to explain the history of the most famous learning hub of the world. A walking tour led them to some of the famous colleges out of the 38 of the like.The colleges that they saw are Trinity,college, Balliol ,Queens College, St John’s college etc
There are 22 thousand students in Oxford who travel in bicycles and students who appear for exams wear black and white and also a robe. After the final exams people were trashed by other students to celebrate crossing the finishing line. 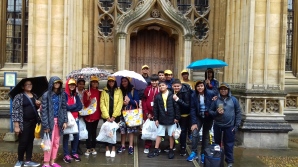 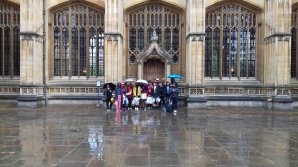 Day six was the last day in Gloucester and Chosen Hill School. SAI students were sad to part from their hosts but were happy also as they were to start the next phase of the trip.Group photographs were taken and CHS students and teachers bade farewell to SAI group. 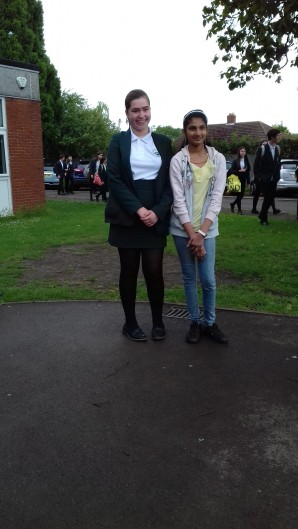 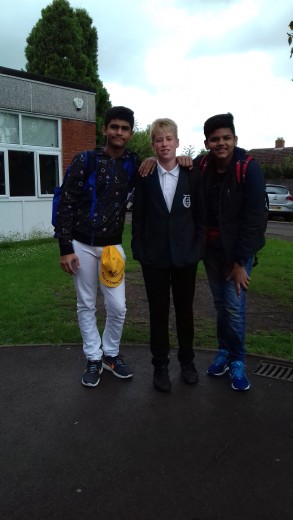 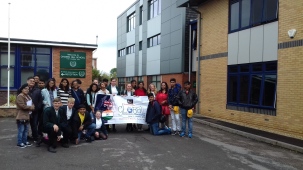 The next one and a half hours journey was interesting for the students as they eagerly looked forward to reach Birmingham and visit the Cadbury world..After checking in to the Travelodge Central Bulls Ring hotel, the students had a sumptuous lunch and were taken to the Cadbury world to have a tour through the colourful journey of getting to know the history of the Cadbury factory, which is hundreds of years old. A 4D adventure was also a very interesting movie experience. After a very satisfying chocolate shopping, the group went to see the famous University of Birmingham which many brilliant students across the world, look forward to be a part of. 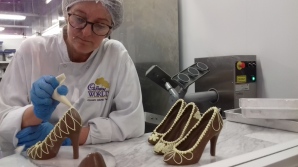 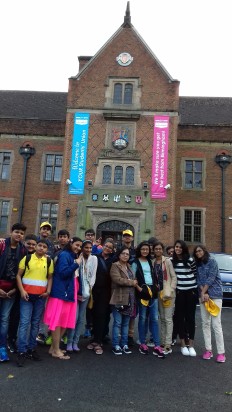 Early morning the next day the journey started, to reach London which took quite an unexpected long time, however soon after reaching the hotel ,SAI group started off to visit Madam Tussauds which was already booked.It was a unique experience for everyone to see the wax statues of the very famous and important personalities of the world and also enjoy taking pictures with them.As planned in the itinerary the group went to Oxford street to do shopping for the near and dear ones. 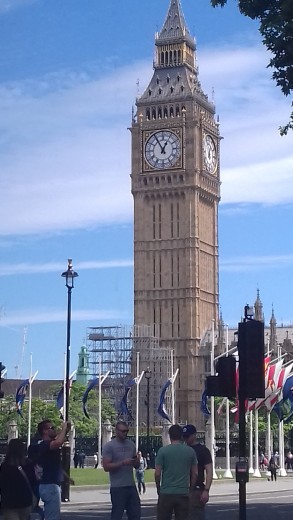 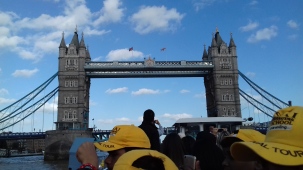 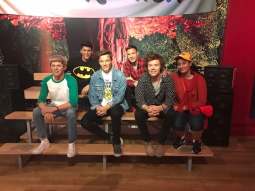 The last day in London was hectic, as there were two more attractions to cover and also a city tour of London was in the plans. The Bus No 30 from London Hackney Central and took the SAI group to Baker street where they boarded the Hop on Hop off Bus and had a nice tour of the city and got down at London Eye.After the amazing ride on the capsules in London Eye they went to enjoy the next attraction that is the Shrek adventure and additionally enjoyed a 7 D movie of the world famous super heroes.,After a, grand lunch in Mc Donalds the most interesting part of the London trip awaited which was a ride in a cruise on the river Thames getting to know about the seven bridges which was so humorously presented by the guide.On the other side of the river they walked to the Oxford street and took the next bus to London Hackney Central.It was the last night in London . 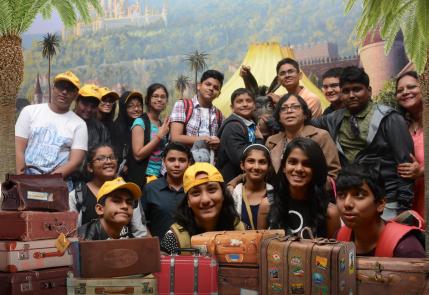 Finally the trip was going to end. SAI team reached the Heathrow airport at around 1 0 clock and after having some lunch they boarded the flight to reach Doha in the mid night followed by the next flight to Delhi.It was exhilarating to touch the Indian soil after ten hectic days in UK and to wait excitedly for the next flight to reach Bhubaneswar where eager parents were waiting to receive their children. 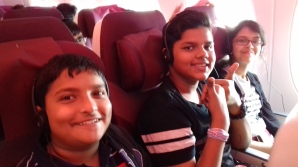 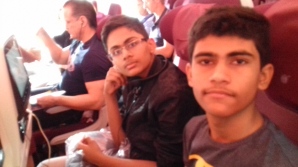 The GIP UK gave a lot of global exposure to the young students in terms of school partnership, being hosted and staying with British families, visiting different important places, getting to know the history of some famous places like Oxford, Birmingham Universities and all the places in London. This was a great opportunity of having a cultural immersion as well. Of course students did learn skills like adaptability, leadership, communication, collaboration and team work.