As part of on ongoing collaborative initiative linking Fujain Province, China, and the State of Odisha, A six-member Chinese delegation visited SAI International School on Monday, August 13, 2018. The discuss focused on future collaboration with Schools and Institutes in Fujian. Mr.Hu Changsheng, Member of the Standing Committee and Head of the Organization, Dept. of the CPC Fujian Provincial Committee headed the  high level Fujian Friendship Delegation. 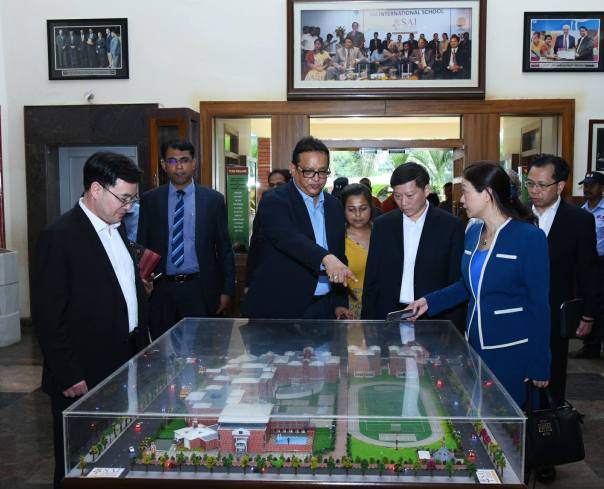 Earlier a team of educationist led by Dr. Sahoo visited China on invitation by the Chinese Government through their High Commission for an educational exploratory visit in March 2017. As part of the trip, the team visited the Fujian Province and toured the Fuzhou No.1 School in the Capital City of Fuzhou.

It was followed by initiating a Global Immersion Programme to China, where students and Staff of SAI visited Fuzhou Province among others. A Memorandum of Understanding between SAI International School and The Fuzhou Foreign Languages School was signed on Friday, June 2, 2017 to promote communication of international education between China and India.

Mr.Hu Changsheng shared his unique view point on the educational differences between China and India. He expressed his excitement on further collaboration between SAI International School and institutions and  organisations in Fujain China.

Thank you Fujain Delegation, for visiting our school !